Rule #10 Thumb your nose at the Joneses


One book that has influenced me a lot, with respect to finances, is  The Millionaire Next Door by Thomas Stanley and William Danko. In it the authors discuss how American Millionaires accumulate their wealth, how they handle their money, what neighbourhoods they live in, what cars they drive, what beer they drink and so on....  Its a bit dry and it states and restates the same basic themes over and over, but it has loads of useful data and anecdotes that show the true self-made-millionaire way of living.  I have it on audiobook so I listen to it on my iPod when I'm out for a walk or a skate.  Yeah, I'm just that cool, longboarding down the street listening to self-help tapes.

Anyways... a significant amount of the book focusses on lifestyle choice, and how "Keeping up with the Joneses" makes it very difficult to accumulate wealth.  There are those that live like millionaires, to impress friends or colleagues, who cant afford it (The Jones keeper-uppers), and then there are those who really are millionaires.... and they dont get that way by buying a new iPhone every time Apple makes an upgrade.  They get that way be being frugal and not buying crap to impress other people.  The book shatters all the typical stereotypes that the wealthy drive expensive cars, live in big swanky houses, and drink expensive champagne.   All these perceptions are typically not true for the truly wealthy... People who do live like that typically have lousy balance sheets. 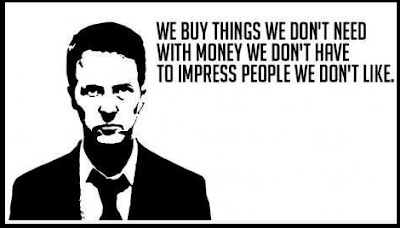 Impressing other people seems like one of the stupidest reasons to buy or upgrade things that are fully functional or still modern.  I know a couple that bought a really big $1000 barbecue when they had a 4 year old fully functional one already.  The catalyst for that purchase was that their neighbour backing on to their yard had just bought a fancy barbecue himself, and our friend just couldn't live with the barbecue they already had once he saw his neighbours... He was being outdone.   So now they have a shiny fancy new barbecue, yet all they do is grill meat with it... well, their old barbecue already did that and it was in fine shape.  So there is $1000 spent on a needless item.  I wouldn't tell them how to spend their money - the earned it, they can do whatever they want with it - but for us, impressing others is very low on what motivates us to buy anything.

A rule-of-thumb that we live by is that we don't compete with friends of family on things we own.  We dress, drive and live in what's comfortable or what our profession dictates is a minimum - that's it.  Why drink expensive wine, when beer is what we like to drink?  Have we been financially successful? We've done okay.  But we don't flaunt it and we don't try and meet a standard of a particular social class... that's just not our scene.  This "not looking the part" is one of the best ways to save money.  In general, a consumption-based, status-driven lifestyle makes it very difficult to accumulate assets , no matter what your paycheque is.

Email ThisBlogThis!Share to TwitterShare to FacebookShare to Pinterest
Labels: competition, consumption, jones, Keeping up with the Joneses, status

Ryan
Kingston, Ontario, Canada
I'm Ryan, and I've got opinions on just about everything.